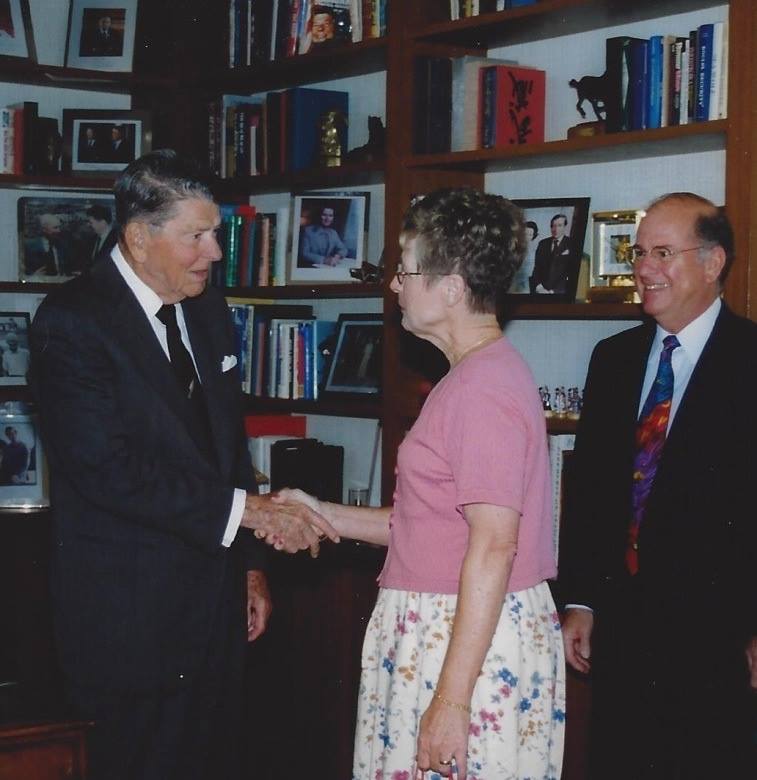 In 1984, I stepped into the voting booth for the first time and proudly cast a ballot for Ronald Reagan.

Today, on what would have been our 40th president’s 110th birthday, I have seen tributes to his life and his legacy. He was known for unwavering affection for our military, unabashed love for our great nation, smiling eyes, a warm smile, and a quick wit.  And the “Great Communicator” indeed had a way with words. I clearly remember many of them:

… to a grieving nation after the Challenger disaster:

We will never forget them, nor the last time we saw them — this morning, as they prepared for their journey, and waved good-bye, and ‘slipped the surly bonds of earth’ to ‘touch the face of God.’

…to a watching world at the Brandenburg Gate in June of 1987:

… to his fellow Americans in his farewell address:

I’ve spoken of the shining city all my political life… And how stands the city on this winter night? After 200 years, two centuries, she still stands strong and true on the granite ridge, and her glow has held steady no matter what storm. And she’s still a beacon, still a magnet for all who must have freedom, for all the pilgrims from all the lost places who are hurtling through the darkness, toward home.

And I distinctly remember his letter to our nation six years after leaving office:

….I have recently been told that I am one of the millions of Americans who will be afflicted with Alzheimer’s Disease… let me thank you, the American people for giving me the great honor of allowing me to serve as your President. When the Lord calls me home, whenever that may be, I will leave with the greatest love for this country of ours and eternal optimism for its future. I now begin the journey that will lead me into the sunset of my life. I know that for America there will always be a bright dawn ahead.

Today, as I thought of this President whom I so admired, I also thought of my dad. I thought of his gleaming eyes, warm smile and quick wit…his unwavering affection for our military and his unabashed love for our great nation. And I thought of his battle with the same horrific disease. My dad – a fiercely proud soldier – never had a chance for victory in this fight; it was an inevitable defeat from the moment of diagnosis.

I remember the day my parents were invited to meet President Reagan at his office in California. This photo beautifully captures the exciting moment. In the retelling of this wonderful encounter, my dad’s joy was tinged with sadness as he saw first-hand the debilitating impact of this cruel disease on a man he so admired. This American president, who had helped put an end to the Cold War, was engaged in a conflict in which victory was only possible in the release of death. Little did any of us know that in years to come my dad would suffer the same affliction, and that all too soon the sunset of his life would be filled with this same darkness.

On this day I remember two great men.  I like to think they have reunited in Glory and that the Gipper and the Colonel are lighting up heaven with their smiling eyes, warm smiles, and quick wits… and I hope they know they’re missed and remembered with great fondness, affection, and respect.