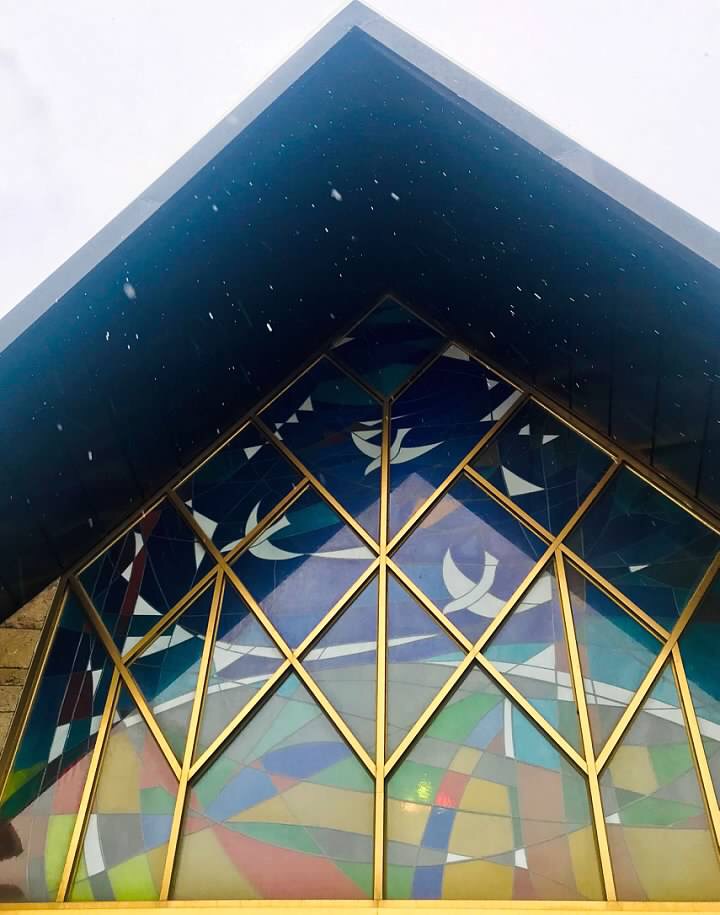 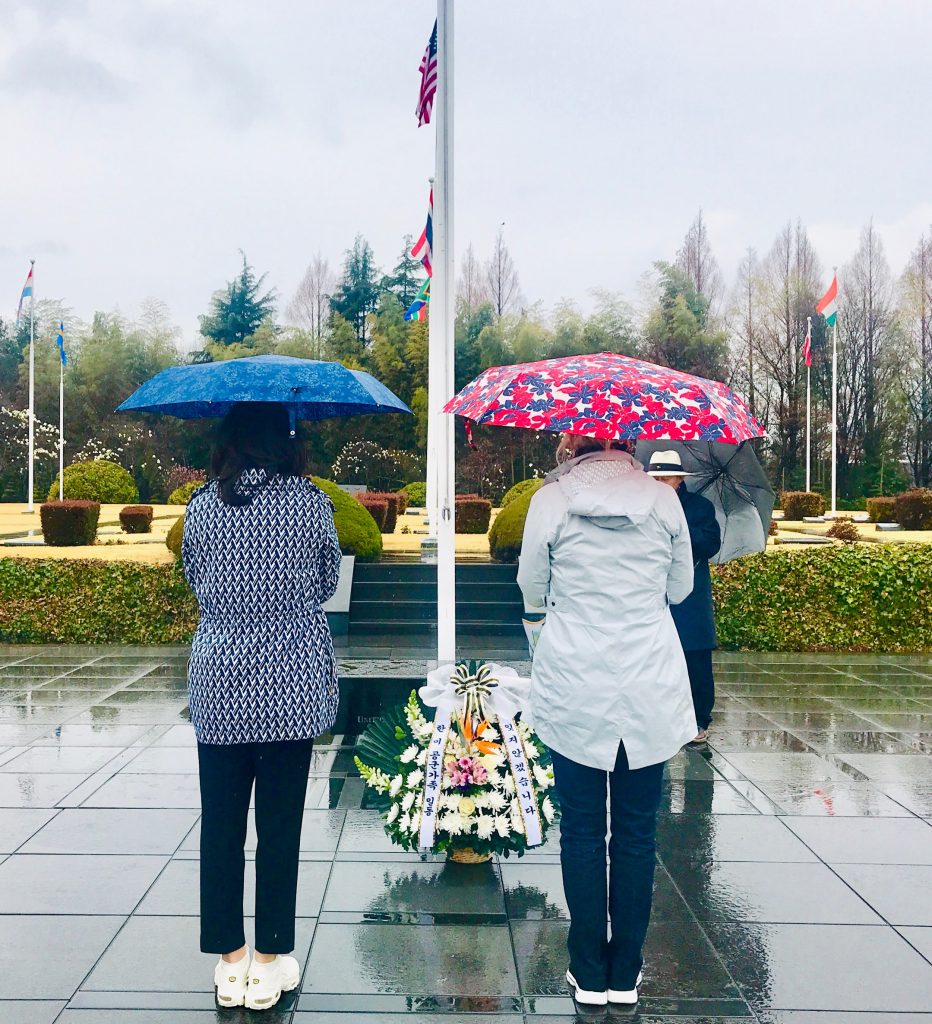 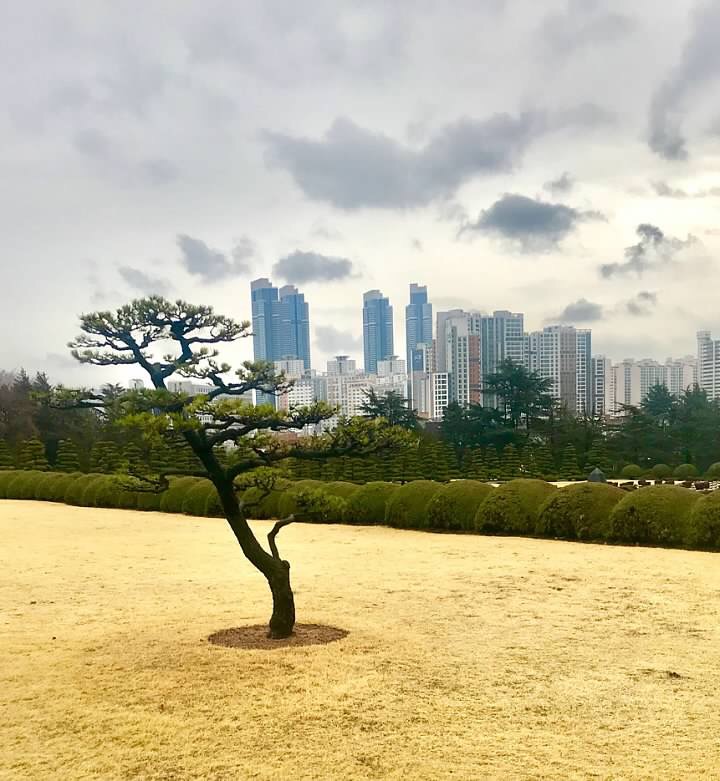 Last spring, I spent the weekend in Busan, on the southern coast of South Korea, with some Korean senior military spouses.  Busan is a beautiful coastal city, teeming with restaurants, ocean and mountain views, trendy shops, temples, and the world’s only United Nations Memorial Cemetery.
The cemetery is nestled inside a picturesque swath of real estate, surrounded by all the trappings of a bustling metropolitan community.  The 35-acre grounds, meticulously landscaped with flowers and sculpted trees, houses monuments, statues, and row upon row of headstones.  It’s a serene and sacred final resting place for more than 2,300 United Nations service members from 11 of the 21 nations who sent forces to Korea during the brutal three-year war against Communist aggression.
It was a humbling  experience to see the flags of the Sending States whipping in the wind above the grave sites of their fallen sons and daughters… to stand at the black-marbled Remembrance Wall and gaze at the names of all who perished… and to place a wreath on a rain-soaked commemorative gravestone.
During the war, the United States suffered the greatest number of casualties — more than 33,000 paid the ultimate sacrifice at Chosin Reservoir, Inchon, Imjin River, and other  brutal battles of this horrific war.  Most are interred in their native homeland, but 36 souls remain in this peaceful cemetery in Land of the Morning Calm.  On that spring day, as we wandered through the serene and somber park, I thanked God for our American heroes, and for all who gave their last full measure of devotion on Korean soil…snd I whispered a prayer  for the families who faced unimaginable pain and perpetual loss.
Our tour included a visit to a small chapel with an A-frame roof, and an exquisite stained glass wall above the entrance depicting birds in flight.  Inside, the center aisle was flanked by a formation of pews, and visitors spoke in hushed and reverential tones.  I was ushered to the front row, and my friend Yuni took her place on the row directly across from mine.  We watched a video honoring the brave and selfless men and women who came to an unfamiliar land, with a language they could not speak, to defend a people they did not know.
They came, they fought, and they died for the invaluable, immeasurable, precious cause of freedom.
Listening to their stories,  I was overcome by the horrific cost of this war, and its indelible impact on my temporary homeland.   Tears welled up and slowly slid down my cheeks, and before long I couldn’t contain a full-on cry.  As I brushed the sorrow from my face, I glanced across the aisle.
I was not the only one overcome with emotion.
When the presentation ended, Yuni and I sat for a while in silence and reflection.  When we rose to leave, she grabbed my hand, pulled me close, and with tear-filled eyes expressed never-ending gratitude —for all who left home to fight against tyranny and oppression during the dark days of the war, and for those in our Armed Forces who continue to defend  her beloved country.
Last weekend marked the 66th anniversary of the signing of the Korean War Armistice Agreement that ended hostilities in what is sometimes called, “The Forgotten War.”  In the years since the fighting ceased,  South Korea – although ravaged and battle-scarred – has flourished in peace, prosperity, and strength thanks to the resolve of freedom-loving people, and the ironclad alliance with brave American patriots who are ready to “fight tonight” to preserve peace and defend the Peninsula.
Some things are worth fighting for.  Some things are worth dying for.
May we never forget those who have done both. 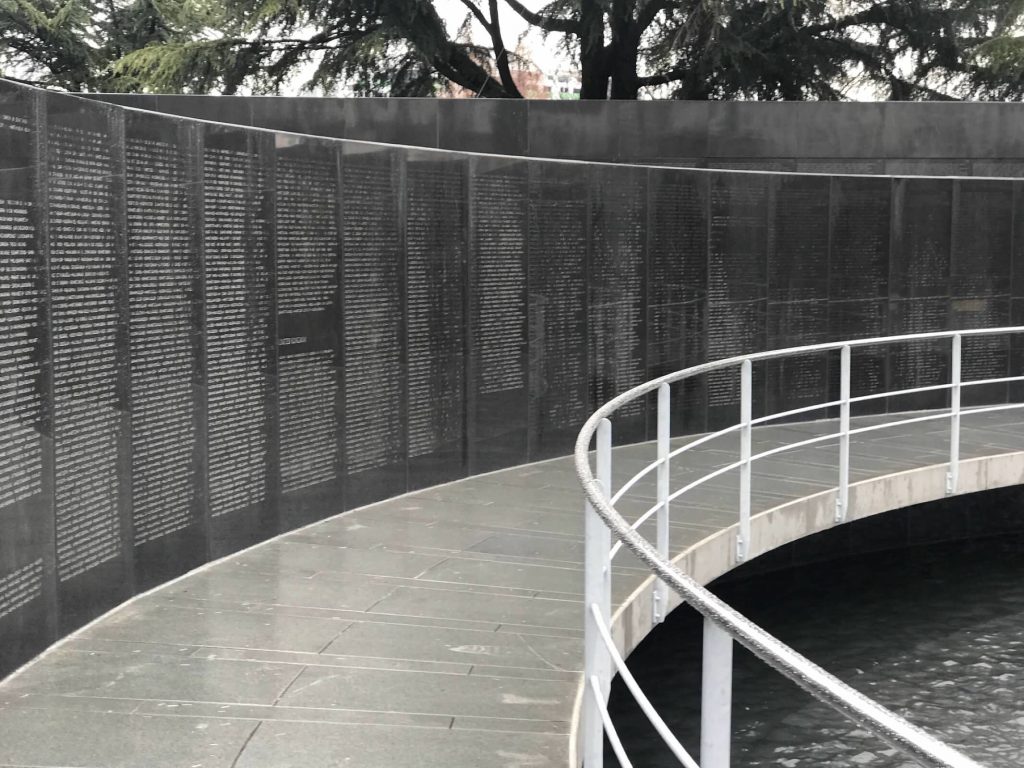 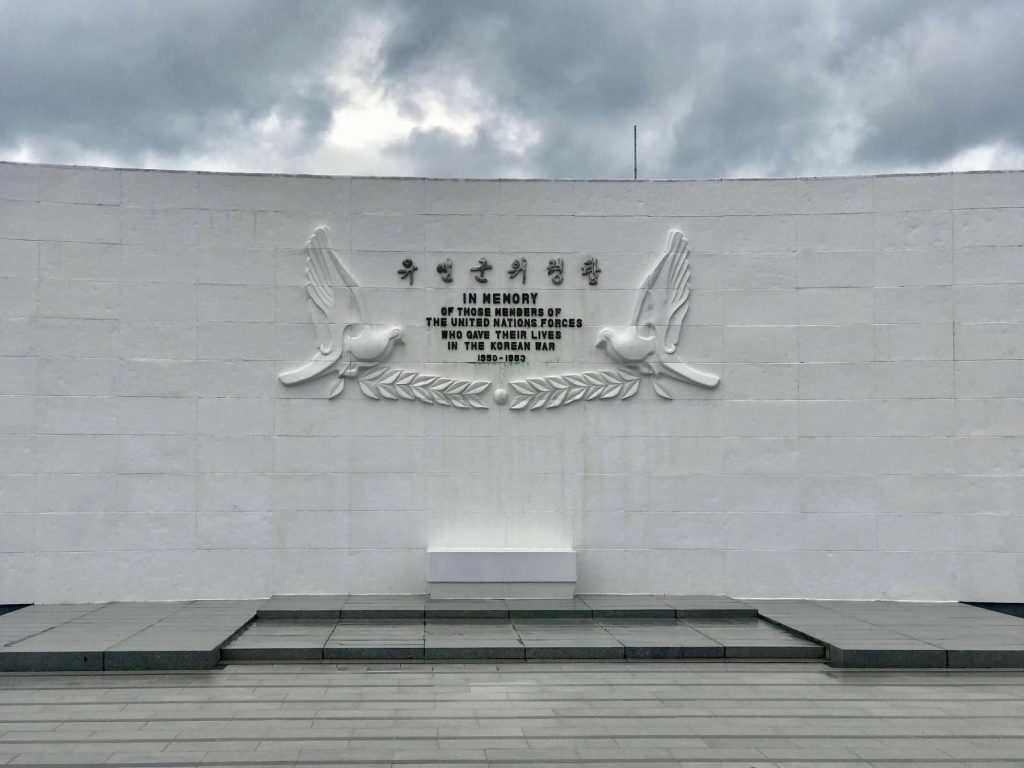